An exhibit titled “Gifts from Napoleon” is the subject of today’s virtual tour of the Smithsonian’s National Gem Collection. Two very special pieces gifted by the French emperor to his second wife, Marie-Louise, are prominently featured in a wall case on the second floor of the Janet Annenberg Hooker Hall of Geology, Gems, and Minerals. One is a majestic silver and gold necklace set with diamonds weighing 263 carats and the other is a diadem glistening with 540 carats of turquoise and 700 carats of diamonds. 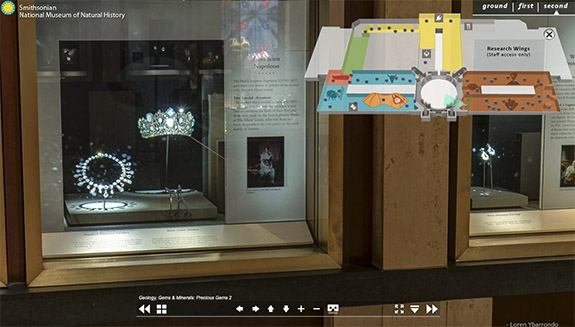 Normally, the hall hosts more than six million visitors annually. But with all the Smithsonian museums in Washington, DC, temporarily closed to support the effort to contain the spread of COVID-19, we’ve been offering these virtual tours. Previous stops on the tour have included the colorful “Stars and Cat’s Eyes” exhibit, the Logan Sapphire, the Dom Pedro aquamarine, the Steamboat tourmaline and a collection of enormous topaz.

Here’s how to navigate to the “Gifts from Napoleon” exhibit.

– First, click on this link… The resulting page will be a gallery called “Geology, Gems & Minerals: Precious Gems 1.”

– Click the double-right arrows once to navigate to the gallery called “Geology, Gems & Minerals: Precious Gems 2.”

– Click and drag the screen 180 degrees so you can see the back wall of cases.

– Touch the Plus Sign to zoom into the exhibit titled “Gifts from Napoleon.”

(You may touch the “X” to remove the map. This will give you a better view of the jewelry. You may restore the map by clicking the “Second” floor navigation on the top-right of the screen.)

A wall panel next to the exhibit explains how Napoleon gifted the jewelry to Empress Marie-Louise: “The diadem was a wedding present in 1810. Napoleon gave his wife the necklace a year later to celebrate the birth of their first son. Both were made by Etienne Nitôt and Sons of Paris. Louise, who was Austrian born, bequeathed the two pieces to the royal family of Austria.”

We’ve got all the details below… 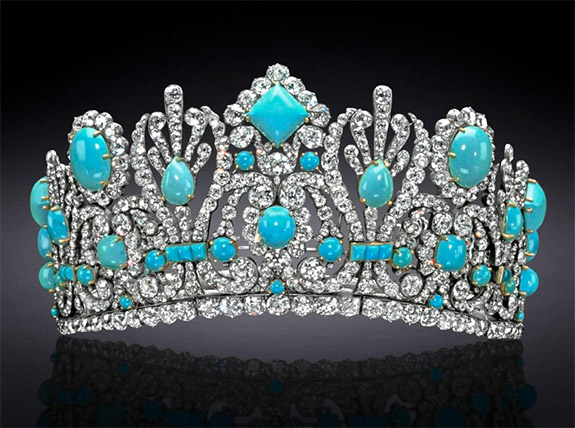 According to the Smithsonian, Marie-Louise (1791-1847) bequeathed the diadem and matching pieces to her Hapsburg aunt, Archduchess Elise. In 1953, Van Cleef & Arpels acquired the jewelry from one of Elise’s descendants, the Archduke Karl Stefan Hapsburg of Sweden.

During the next two years, the jeweler removed the emeralds from the diadem and sold them individually in other pieces of jewelry. Its advertising campaign at the time promised “An emerald for you from the historic Napoleonic Tiara…”

Some time between 1956 and 1962, Van Cleef & Arpels reset the diadem with sky blue turquoise. The new-look diadem was exhibited at the Louvre Museum in Paris along with the necklace, earrings and comb, as part of a special exhibition in 1962 focusing on the life of Empress Marie-Louise.

American socialite Marjorie Merriweather Post (1887-1973) purchased the diadem and donated it to the Smithsonian in 1971.

(The Smithsonian clarified that a diadem is the type of crown that is not a complete circle. It usually goes three-quarters around and is open in the back.) 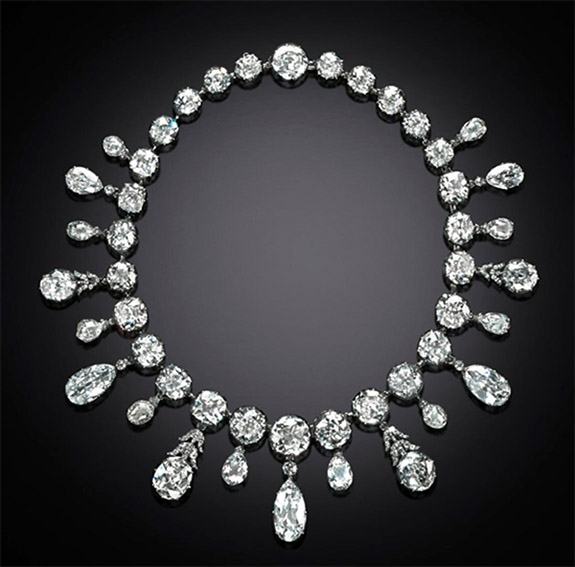 The Napoleon Diamond Necklace celebrated the birth of Napoleon II, the future Emperor of Rome, in 1811. The necklace consists of 234 diamonds, with the inner circle made up of 28 old mine-cut diamonds, suspending a fringe of nine “pendeloques” (five pear shapes alternating with four ovals) and 10 briolettes. Mounted above each pear shape is a small round brilliant diamond, while the four ovals are attached to motifs decorated with 23 smaller diamonds. Each of the 10 briolette mountings is accented with 12 rose-cut diamonds.

When Marie-Louise died in 1847, the necklace was given to her sister-in-law, Archduchess Sophie of Austria.

According to the Smithsonian, the necklace was bequeathed in 1972 to the Archduchess’ son, Archduke Karl Ludwig of Austria. The necklace remained in the Hapsburg family until 1948, when Archduke Ludwig’s grandson, Prince Franz Joseph of Liechtenstein, sold it to a French collector who, in turn, sold it to Harry Winston, Inc., in 1960.

Merriweather Post — who clearly had an affection for Napoleonic jewelry — acquired the necklace, in its original case, from Winston and donated it to the Smithsonian in 1962.