Lucara Diamond Corp. just recovered a 549-carat unbroken white diamond of “exceptional purity” from its Karowe Mine in Botswana — a mine that has earned worldwide recognition for producing the 1,758-carat Sewelô, the 1,109-carat Lesedi La Rona and the 813-carat Constellation diamond. Those diamonds rank #2, #3 and #8 on the list of the largest rough diamonds of all time. 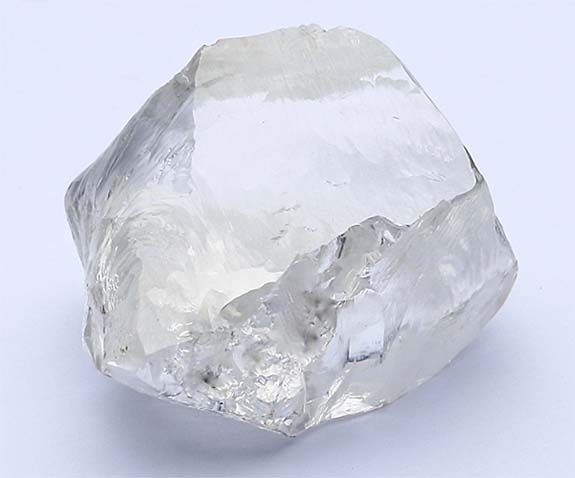 While Lucara didn’t announce the value of the rough diamond, we can offer a guess based on the previous sales of similar diamonds. Karowe’s Lesedi La Rona, for instance, earned more than $47,000 per carat ($53 million) and the Constellation generated more than $77,000 per carat ($63.1 million). Using $50,000 per carat as a guideline, the 549-carat diamond would yield $27.4 million.

The still-unnamed 549-carat rough stone is the fourth-largest diamond ever recovered from the prolific Karowe mine. It was cherry picked from Lucara’s MDR (Mega Diamond Recovery) XRT circuit, a system that uses advanced technology to identify 100-carat-plus diamonds by monitoring the rocky material for X-ray luminescence, atomic density and transparency. Previously, large diamonds might have been mistaken as worthless ore and pulverized during the primary crushing process.

The company has been using MDR technology since 2017, and so far this year, six diamonds weighing more than 100 carats have been recovered at the Karowe Mine. In 2019, Karowe yielded more than 20 diamonds larger than 100 carats. Eight of those exceeded 200 carats.

According to mining.com, Lucara is close to completing a feasibility study into how underground production might extend the lifespan of the Karowe mine, which has been in operation since 2012.