Within the span of just a few hours, a family of gold prospectors pulled two huge gold nuggets from the ground near Tarnagulla in the Australian state of Victoria. The dramatic scene played out during Thursday’s episode of Aussie Gold Hunters on the Discovery Channel. 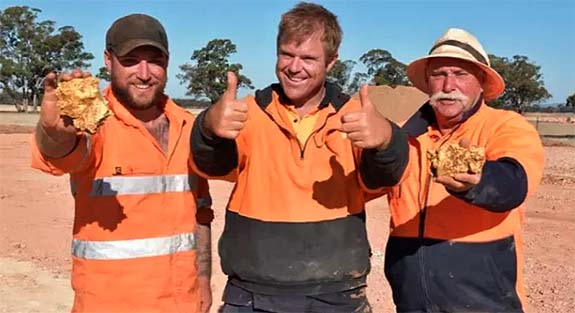 Brothers-in-law Brent Shannon and Ethan West discovered the nuggets with the assistance of West’s dad, Paul, near the old gold mining town of Tarnagulla, which once boasted the world’s deepest mine at 4,613 feet. The family had a hunch that there was still gold to be mined in this area and waited months for a permit.

The hunch paid off — big time.

The team, which calls itself the Poseidon Crew, used an excavator to move a large chunk of earth and then pushed it out thinly so they could use their metal detectors to find the gold.

“We can recover more gold that way, and it’s a better way to do it and a safer way to mine,” Shannon told News7.

Ethan West explained that he has encountered thousands of pieces of gold during the four years he’s been mining, but none can compare with the latest discoveries.

“These are definitely one of the most significant finds,” West said. “To have two large chunks in one day is quite amazing.”

The area’s first Gold Rush period was in the 1850s and gold has been found continuously in Australia’s “Golden Triangle” ever since.

While the two nuggets weighing 3.5 kilograms are impressive by most standards, they are just a fraction of the weight of “The Welcome Stranger,” which was discovered near Moliagul, Victoria, in 1869. That record-setting nugget weighed a staggering 2,300 ounces (143.75 pounds) and would have a precious metal value today of more than $4.4 million USD. Legend states that it had to be broken on an anvil before it could fit on a bank scale.

In 1981, the 256-ounce “Pride of Australia” was unearthed nearby in Mosquito Gully, just north of Wedderburn.